After Christmas, my brother Christer and his girlfriend, who both live in Oslo, wanted to get away from the cold snowy Norwegian winter and come and meet us somewhere in South East Asia. All they wanted was a relaxing warm place with a nice beach. First we considered Thailand, but Thailand in the beginning of January turned out to be expensive for our budget.

After some research on the internet, we decided on Mui Ne in Vietnam which seemed like a nice place with a beautiful beach. Before we knew it, we had booked flights on the 1st of January, transport from Saigon and a hotel for three weeks in Mui Ne! We were all so excited, our first holiday together! Yeaiiii!!!! 🙂

The first part of the trip went fine, all the flights were on schedule and we all met up on the flight from Bangkok to Saigon. We arrived at Saigon airport in the evening, and our driver waited for us at the gate. Well, from there it all went wrong.

It turned out that the suitcases from Oslo had been stuck in Bangkok! One of them were scheduled to come to Saigon with a flight late that evening, and the last suitcase would probably not arrive until the next day. We explained this to our driver, and asked if he could wait for us a couple of hours until the first suitcase arrived, and that we would pay him extra for the wait. He said yes, and we thought everything was OK.

When the suitcase finally showed up it was 11 p.m. in the evening, and as we came out of the airport terminal our driver was gone! After several calls and a lot of pleading with the transport company where we had booked and prepaid for the transport to Mui Ne, the driver finally came back and picked us up! We were so relived! But it was now past midnight, and we had a long drive in front of us.

The car trip from Saigon to Mui Ne turned out to be hell! The roads were terrible, and full of big cargo trucks, driving incredibly slow. We later found out that the reason everybody was driving in 20 km/h some places, was that the police had intensified their checkpoints due to the upcoming Chinese New Year. This is the biggest holiday in Vietnam, and the police want to have some “extra” cash in their pockets. Our driver was so tired he actually fell a sleep a few times while driving! We had to feed him candy and red bulls to help him stay awake! Pretty scary! The drive took about 5 hours, but felt like forever!

Finally we arrived at White Sands Resort, around 5 a.m. 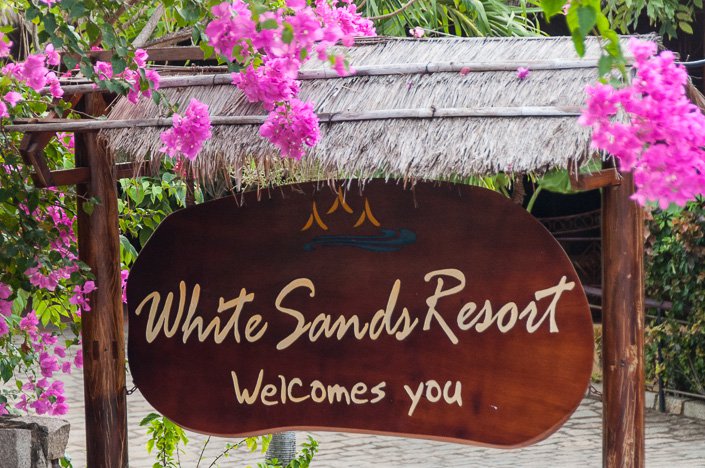 We were all really tired and exhausted, especially the two from Oslo who had traveled more than 24 hours all the way from Norway! Well our “problems” did not stop here, it turned out that the internet booking site we had used had accidentally overbooked the hotel, and there were no rooms available. But as a compensation the two managers at White Sands had given us their house! Wow, it was so nice of Jordan and Harry! They totally saved our day, eh, night! 🙂

We stayed two nights in this big house, which were also located on the hotels property, before we could move in to our rooms. And wow, the rooms we got were perfect! Right on the beach! We loved it!

We enjoyed almost three relaxing weeks at White Sands Resort, a really nice hotel with a stunning beach! The beach at White Sand is easily the best part of the beach in Mui Ne. The main Mui Ne beach in the center is very crowded and packed with kite surfers and kite schools. The beach there is not nearly as nice as White Sand Beach!

Before we arrived we were a little concerned that White Sands Resort would be to remote, but it turned out to be easy to get to Mui Ne Center from White Sands. You can either take a taxi (takes 5 minutes), or walk along the beach. There are very few restaurants, shops or pubs around White Sands Resort, but in Mui Ne Center you can find it all. The hotel do however have a restaurant and a beach bar, with great food and drinks, where they serve both western and Vietnamese food. The hotel also has a gym. 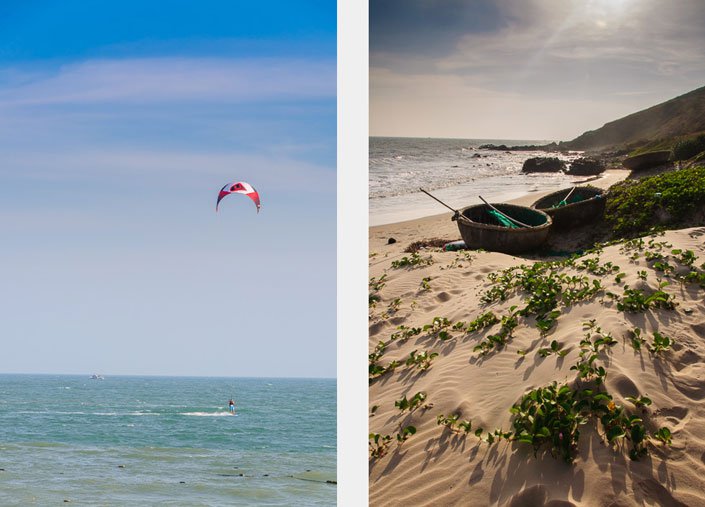 We really enjoyed our days at White Sands Resort. Especially the managers Jordan and Harry were fantastic! They did everything to make our stay absolutely perfect!

Due to our not so nice experience with driving from Saigon to Mui Ne, we decided to take the train back to Saigon. Unfortunately, there had been an accident on the train tracks, so our train got delayed by more than two hours! We were pretty stressed out about whether or not we would miss our flight to Cambodia. Luckily we did catch the flight, but we had to skip our planned visit to the war museum in Saigon. Apparently, we did not have luck on our side regarding transportation on this Mui Ne trip….. 🙂

Our stay at White Sands Resort, despite getting off to a rocky start, turned out great in the end! A huge thank you to the managers, Jordan and Harry, for doing everything in their power to make our stay memorable! One night they even threw a barbecue party for all the guests staying at the White Sands Resort. It was really nice, with a live band from Singapore playing, and delicious Vietnamese barbecue! We got what we wanted, a stunning beach, with a relaxing and quiet atmosphere, situated not too far from a city center with restaurants, pubs, and shops.

It has to be said that Mui Ne town itself is not that great, a typical busy charmless touristy place. It is extremely popular among Russian tourists, Mui Ne Vietnam is actually packed with Russians! There were not that many at the hotel where we stayed, but in town, they were in the majority. Most of the restaurants and pubs have menus and signs in Russian, and some of the waiters know more Russian words than English. Also, a few of the kite surfing schools will only teach Russians. We were told the reason is because there are cheap direct flights from Moskva to Saigon, and a lot of very affordable package deals are available for Russian tourists.