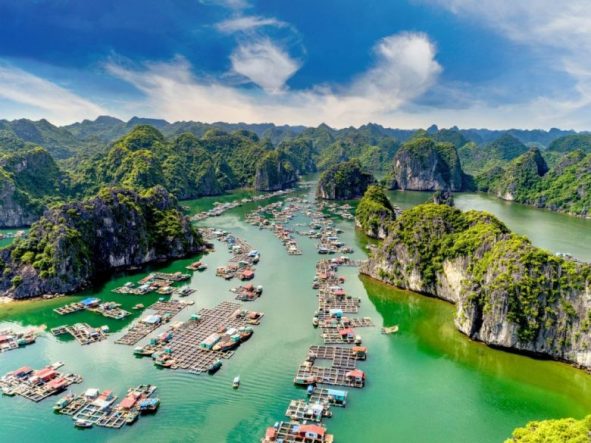 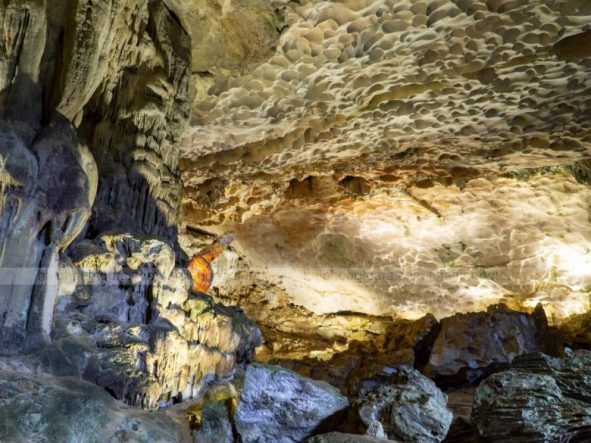 The population of Hạ Long Bay is about 1,540, mainly in Cua Van, Ba Hang and Cap De fishing villages. Residents of the bay mostly live on boats and rafts buoyed by tires and plastic jugs to facilitate the fishing, cultivating and breeding of aquatic and marine species. Fish require feeding every other day for up to three years, when they are eventually sold to local seafood restaurants for up to 300,000 Vietnamese dong per kilogram. Today the life of Hạ Long Bay inhabitants has much improved due to new travel businesses. Residents of the floating villages around the Ha Long bay now offer bedrooms for rent, boat tours, and fresh seafood meals to tourists. While this is an isolating, back-breaking lifestyle, floating village residents are considered wealthy to residents of other Halong Bay islands.

At present, the Quang Ninh provincial government has a policy to relocate the households living in the bay to resettle, in order to stabilize their life and to protect the landscape of the heritage zone. More than 300 households living in fishing villages in Hạ Long Bay have been relocated ashore in Khe Ca Resettlement Area, now known as Zone 8 since May 2014. This project will continue to be implemented. The province will only retain a number of fishing villages for sightseeing tours.

Due to a simultaneous combination of ideal factors such as thick, pale, grey, and strong limestone layers, which are formed by fine-grained materials; hot and moist climate and slow tectonic process as a whole; Halong Bay has had a complete karst evolution for 20 million years. There are many types of karst topography in the bay, such as karst field.

The karst landscape of Hạ Long Bay is of international significance and of fundamental importance to the science of geomorphology. The fenglin tower karst, which is the type present in much of Ha Long Bay, is the most extreme form of limestone landscape development. If these karst landscapes are broadly compared in terms of their height, steepness and number of their limestone towers, Ha Long Bay is probably second in the entire world only to Yangshou, in China. However, Hạ Long Bay has also been invaded by the sea so that the geomorphology of its limestone is lands are, at least in part, the consequence of marine erosion. The marine invasion distinguishes Ha Long Bay and makes it unique in the world. There are other areas of submerged karst towers which were invaded by the sea, but none is as extensive as Ha Long Bay.